1. The Basic Status of Disease

Like an atom, a human body generally causes disease on the basis of the unbalance of the organs. All of our bodies are living in the balance between Space and Time. A human body is always controlled by this balance. 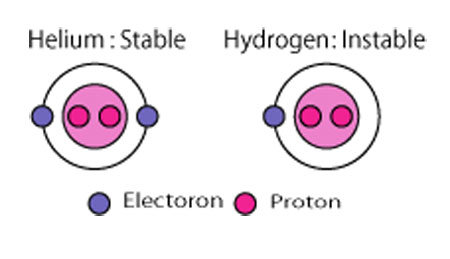 3. Instability of A Human Body

If so, how a human body loses the imbalance among organs. The figure below illustrates this mechanism, which means the process of causing Inflammation. 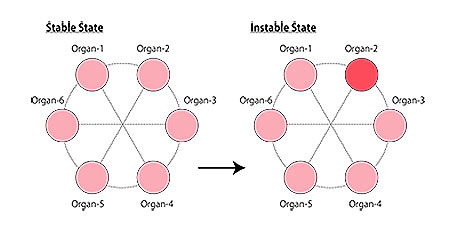 The figure above is a basic model of a system that can reproduce the basic model of a human body. In the figure above left, its stable state indicates a system keeping a good balance among its elements which means organs. On the other hand, in the figure above right, its system loses the balance on basis of Organ-2 that increases its metabolic rate. That is, Organ-2 can be regarded as causing Inflammation. In order to get back a good balance, Organ-2 needs to gather water which cools heat. This phenomenon is a swelling change that is caused by Inflammation.

Although all diseases can be classified into three pathological changes: Inflammation, Degeneration, and Tumor. The explanation of Long Covid needs only the mechanism of Inflammation. So if you want to know the mechanism of Degeneration and Tumor including Cancer, I will explain the theoretical mechanisms. I have already analyzed these three pathological changes.

(b) Background Instability
Generally speaking, a human body easily causes disease on the basis of its background instability. Almost all medical doctors seem not to know this mechanism. 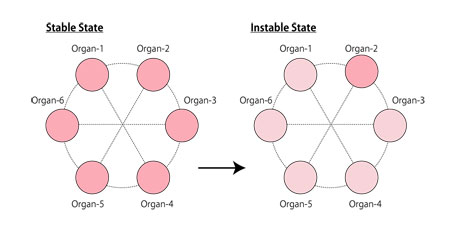 Like foreground instability, a human body also causes background instability. In the figure above, Organs except Organ-2 decrease their metabolisms, only Organ-2 must look like increasing its metabolic rate, and which means Organ-2 causes Inflammation. In fact, this mechanism causes many diseases by using immunity. Maybe, almost all collagen diseases occur by this mechanism; however, modern medical science does not notice this mechanism, and medical doctors tend to look only at an organ with symptoms. Notice that various diseases occur by the background organs.

4. Summary of Instability of A Human Body
A human body is a system consisting of organs; this reveals that an organ is always related to other organs. Do not look only at an organ with symptoms, look always at an organ and its background organs. Pay attention always to this mechanism, and which plays an important role in causing Long Covid.

→ Continue to the next page: Disease analyzed by Japanese Herbal Medicine.